You Are Here: Home → 2023 → January → 12 → Campus journalists call out Meta over deleting of posts on censorship, red-tagging

Campus journalists call out Meta over deleting of posts on censorship, red-tagging 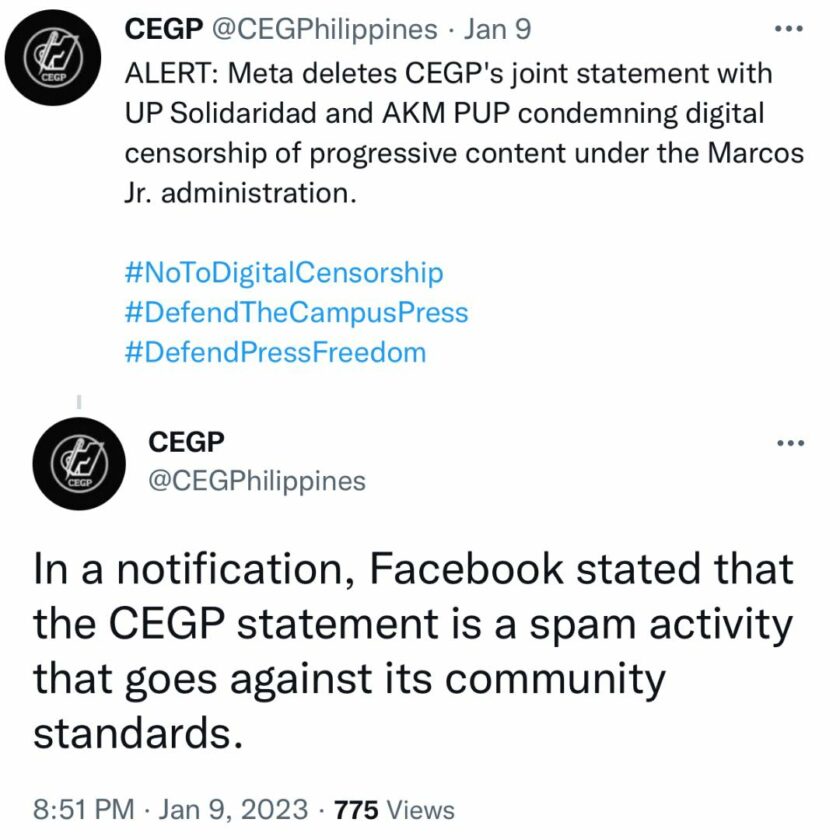 MANILA — A group of campus journalists called out social media giant Meta over the deleting of their earlier statement condemning censorship and red-tagging.

“The purging of progressive contents and platforms reminds us of the dark times of Marcos Sr.’s Martial Law. Despite being online, how this takedown nonetheless tears into our freedom to dissent and expression gives us no less than the chilling effect of 1972,” Melanie Feranil, the spokesperson of the College Editors Guild of the Philippines (CEGP), said in a statement.

On Jan. 10, the Facebook post of CEGP, UP Solidaridad, and Alyansa ng Kabataang Mamahayag ng PUP was deleted and tagged as spam. The statement was released in support of campus publications and media outfits that are red-tagged and continue to experience digital censorship and attacks by suspected state-sponsored trolls.

The group said that the incident is a “brazen attempt to digitize Martial Law, aiming to intimidate, silence, and repress journalists and campus press freedom.”

In a statement, CEGP said the takedown of the post resembles the political repression back in the martial law days of the late dictator Ferdinand Marcos Sr.

“If we see how this happened from one organization to another, it is obvious that this takedown is a systematic attempt to intimidate and silence patriotic and democratic formations. Whoever is behind this makes sure that it sends the message that no one should be taking the opposing side even if it is necessary,” said Feranil.

CEGP said this is not an isolated case as they have documented other posts and Facebook Pages that received warnings of being unpublished from their platform, following their reporting of the recent death of the Communist Party of the Philippines founding chairperson Jose Maria Sison.

Reports of Sison’s passing that were published by Polytechnic University of the Philippines’ official campus publication, The Catalyst, were deleted from the platform.

Other pages that have earlier reported having posts taken down or their Page deleted include those that are owned and managed by progressive groups Anakbayan, Kilusang Mayo Uno, and Bagong Alyansang Makabayan.

“Digitalizing Martial Law or any other repressive stunts they may think of would not stop the campus press and the youth from calling ‘never again’ and ‘never forget.’” Feranil added.

The CEGP said progressives and critics of this administration face increased vulnerability as Meta’s arbitrary community standards are weaponized to censor, limiting engagements and, in some cases, having their contents deleted.

They added that Meta’s participation or lack thereof in the removal of contents may perpetuate impunity against journalists and government critics.

CEGP said, “this will only spark anew the flames of First Quarter Storm and EDSA Revolution be it on the screens or the streets,” Feranil said while calling for the public to support the besieged campus publications and progressive groups in fighting back against the Marcos administration’s attempt to block the truth and persecute truth-tellers through NTF-ELCAC and their troll armies.” (RTS, JJE, RVO)