The making of the ‘Mad in Malacañang’ effigy

MANILA — Effigies of newly-elected Presidents always come as a challenge. The effigy should reflect the country’s political condition.

The new president, Ferdinand Marcos Jr., came into power as a result of an electoral process that was not transparent and therefore susceptible to fraud. On election day, there were numerous reports of machine failure and vote buying. Thirty-one million electronic votes catapulted him to the most powerful seat in the land.

The effigy has become a regular fixture of major rallies in the Philippines.

The Marcoses are no strangers to effigies. It was in 1970, after Ferdinand Marcos Sr.’s 5th SONA when activists hurled crocodile and
coffin effigies towards his direction. The protest was violently dispersed. This paved the way for the First Quarter Storm, a series of mammoth protest rallies that shook the established order. 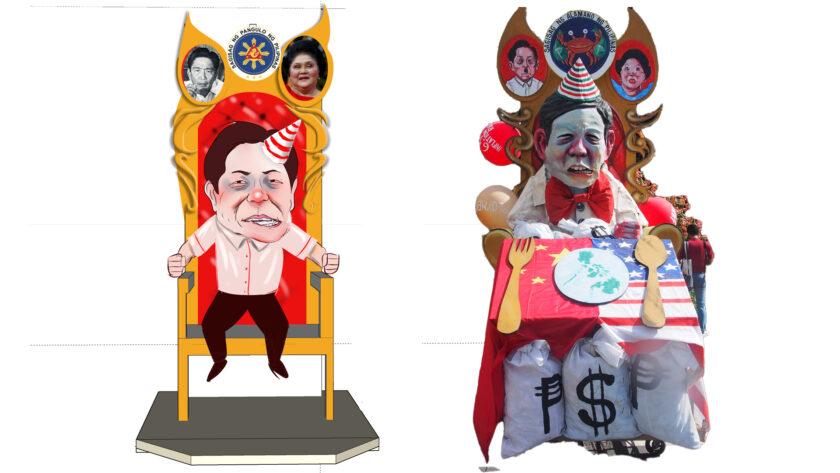 Fast forward to July 25, 2022, the dictator’s son gave his first ever SONA speech. Bagong Alyansang Makabayan (BAYAN), a broad coalition of progressive groups and peoples’ organizations, led the protest in the streets, mounting an alternative telling of the state of the nation titled ‘The People’s SONA.’

Upon Marcos Jr.’s victory, controversial filmmaker Darryl Yap’s movie Maid in Malacanang was immediately greenlighted by Viva Films. The movie trailer goes so far to twist reality to fit the plunderous family’s narrative as they leave the Presidential Palace. This signals a new age of historical revisionism. Now that Bongbong Marcos is back in power, we could expect the new regime to fix their public image. 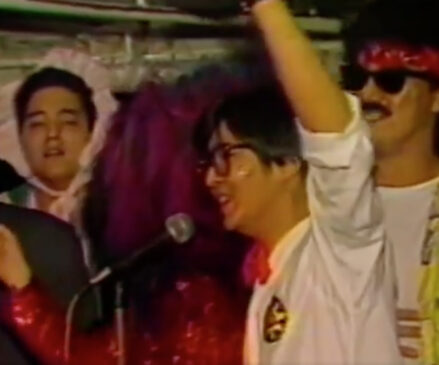 It is the late great filmmaker Lino Brocka who said, “…it is the supreme duty of the artist to investigate the truth, no matter what forces attempt to hide it.” Thus the effigy is in line with Brocka’s statement.

In his youth, Marcos Jr. was known to be a happy-go-lucky party goer. The video archive called the “Palace Tapes” showcases the First family’s ostentatious lifestyle amidst widespread poverty. In one scene, Bongbong could be seen sporting a flashing red bow-tie while partying.

A few days after his inauguration, a party in Malacanang was organized to celebrate Imelda Marcos’s 93rd birthday. An extravagant menu leaked online belied Imee’s claim that a simple merienda was served. The Marcoses are back indeed.

For this year’s effigy, what needed to be highlighted was Bongbong’s seeming disconnect to the realities on the ground, thus the party hat and bow tie .

The dictator’s namesake is sitting on top of a golden chair, adorned with the portraits of his parents. A mock presidential seal is mounted between the plunderous first couple, with an image of a crab clinching moneybags on both pincers. Gold and red balloons were placed at the sides of the chair, Marcos oblivious to the economic figures printed on them. On his lap are moneybags signifying ill-gotten wealth.

Right in front of the effigy is a table with the flags of the U.S.A. and China, the two major superpowers vying for supremacy in Asia. The Philippines lies on the plate, as if ready to be consumed by the party boy. Whose interest will Marcos Jr. serve? The US? China? Or both?

The whole process of creating the effigy took one week, from July 18 to 25. Volunteers from different people’s organizations participated in its construction. Up until the wee hours of July 25, finishing touches were being added.

Towards the end of the People’s SONA program along Tandang Sora and Commonwealth Avenue, rain started to pour. But this did not dampen the spirit of the people. The golden chair was toppled and the paper mache figure was destroyed by the indignant crowd, a symbolic end to the most corrupt and plunderous dynasty in Philippine history.

Perhaps a glimpse of what lies ahead in the years to come. (RTS, RVO)