Heroes on call: Filipino health workers in the midst of an Omicron surge

MANILA – It was Tuesday, Jan. 18, when Pauline Budy, 40-year-old nurse, began to feel the symptoms of the dreaded COVID-19. A day later, she, her husband, and their two children aged four and five tested positive for the virus. They were confined at San Lazaro Hospital for seven days where Pauline has been working for 15 years.

A week after, Jan. 26, Pauline and her family were discharged from the hospital. However, Pauline did not know how they could survive because her savings would not suffice to cover their medicines and daily needs. This is despite their hospital expenses being covered by both the hospital and Philhealth.

The Budy family is still in home isolation as they are still experiencing COVID-19 symptoms such as tiredness, difficulty in breathing, cough, and cold.

“It is very traumatic because apart from the comorbidities that my husband and I have– I have asthma and he is hypertensive –my whole family was infected… We, the nurses and doctors, are the only ones who work together in this situation. We have not yet received support from the DOH (Department of Health),” Budy told Bulatlat in an interview.

According to Rabindra Abeyasinghe, World Health Organization (WHO) Philippine Representative, the difference of the January 2022 surge is that the hyper-contagious Omicron variant easily infected health workers which forced them to isolate, and caused hospitals to run short in manpower.

As of January 30, Sunday, San Lazaro Hospital has reported a total of 281 health workers, including hospital staff and administration, who tested positive for COVID-19, which resulted in short-staffing just like many other medical facilities.

As a result of this escalation in cases of infection among health workers, AHW reported that only one nurse is on duty per shift at the Lung Center of the Philippines (LCP) Emergency Room, while the Philippine Heart Center (PHC) COVID ward has a ratio of one nurse to 24 COVID-19 patients. Jose Reyes Memorial Medical Center (JRRMMC) also reported that one nurse is handling eleven COVID patients with an additional ten patients who are exposed to COVID. 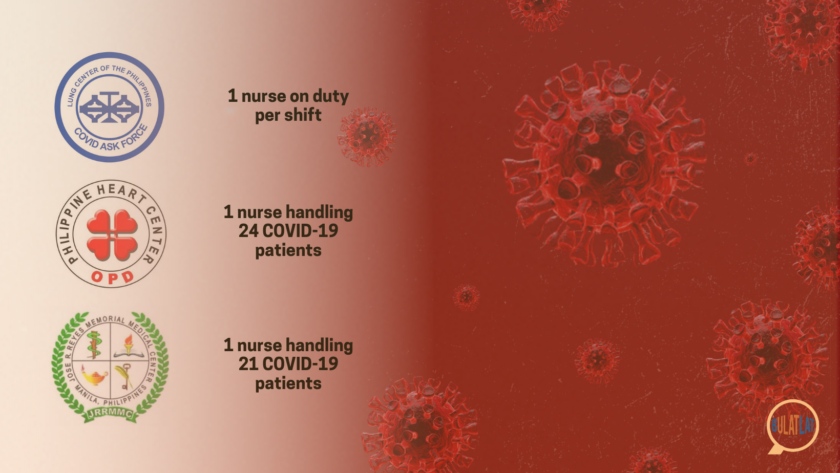 Currently, the Out-patient Department (OPD) of the National Kidney and Transplant Institute (NKTI) is closed due to lack of health personnel as many of them were infected and quarantined.

The DOH’s response is to shorten the quarantine period and isolation for health workers, as stipulated in Department Order (DO) No. 2022-002 Section E.

The Alliance of Health Workers (AHW) said that this order will do nothing but abandon the safety, protection, and welfare of the health sector. The group added that this is inhumane, unjust, irrational, and deceptive to both health workers and the general public.

Cristy Donguines, president of Jose Reyes Memorial Medical Center Employees Union (JRMMC-EU), said in a webcast protest by AHW that reducing the duration of quarantine and isolation of health workers will just worsen the situation. However, right after Budy was discharged from the quarantine facility, she was asked to attend her duty.

“I told them that I am not yet recovered. I still have to take care of myself. How can we go on duty if we, workers, could hardly breathe? I wouldn’t mind if we were just sitting on our duty. We are no longer considered as human beings,” Budy said.

Senatorial aspirant Neri Colmenares also expressed his distress on Twitter saying that health workers need time to recover and keep safe from being infected or infecting others. He acknowledges that we need all frontliners on board due to the surge, but we should not forget that health workers are not superheroes but are ordinary people and they don’t have immunity from the virus.

“The DOH and IATF (Inter-Agency Task Force) are so demonic. With that shortened quarantine period, we were no longer treated as human beings. We are not immortals. They don’t even give us enough support and yet they still want us to work even if we’re sick? Are they even thinking? They keep on revising the guidelines and it seems like until now, they still don’t know how to deal with this pandemic,” Budy told Bulatlat.

Budy believes that she got infected while working at the hospital. She was assigned to the emergency room. Due to understaffing and the urgency to attend to patients, she said that health monitoring was the least in their minds.

“Many health care workers are getting infected, and duties are being compromised,” said Robert Mendoza, national president of AHW.

Donguines said that despite being fully vaccinated and having booster shots, the recent surge among their ranks indicates that they are still very vulnerable to the new Omicron variant. She added that if health workers are asymptomatic, the DOH refuses to test them even if they have been exposed to the virus.

“They force us to work instead of allowing us to be isolated,” she uttered.

Meanwhile, Budy’s infected colleagues at San Lazaro Hospital were also immediately discharged from their quarantine facilities so they could attend to their duty at the hospital. Budy added that there were times that even if her colleagues still have symptoms, they were still forced to work because of the issued order.

To make matters worse, hospitals are also having a shortage of protective equipment such as PPE sets, face shields and N-95 face-masks which to date, have still not been resolved by the DOH.

“Provide us complete and proper PPE and give us the benefits that are promised… The quarantine period should be prolonged, at least 10 days, so we can have time to rest. We are not chess pieces nor robots,” Budy said.

According to AHW, many health workers from private and public hospitals have yet to receive their COVID-19 benefits, such as meal, accommodation, transportation and hazard allowances, and compensation benefits.

Donguines expressed that the government has really betrayed and exploited the health sector. She added that health workers have been underpaid and overworked while the promised COVID-19 benefits have not been provided fairly and completely.

“The MAT [meals, accommodation, transportation] that we are supposed to receive was not given properly. What they call singular benefits, we are very at a loss there. What we are asking for is P15,000 per month because even transportation and accommodation are not provided… The increase in our salary, Nurse II, was only offset by tax… Whatever the health workers tell about them is true. The benefits that they were saying are just for press releases,” Budy told Bulatlat.

Jaymmee De Guzman of Filipino Nurses United reiterates their call for serious strategizing of COVID-19 response to save people from this national public health disaster. She added that instead of passing irrational orders, the government should ensure public safety and protect health workers.

The call for free mass testing continues as people are deprived of opportunities to get tested as it is inaccessible and expensive. As health workers put their lives on the line for our country and for the people, they are asking the government to grant them the benefits that are being deprived of them.

Currently, the petition filed by AHW for the dismissal of DO No. 2022-002 Section E is still under deliberation at the DOH.

“You have to be on duty for 16 hours because you will feel sorry for your co-workers as well as the patients. Because of this protocol, we are treated as “heroes”, literally, as if we really have superpowers… Duty continues; we suffer. Here in the Philippines, every worker suffers,” Budy told Bulatlat. (JJE, RTS, RVO)