You Are Here: Home → 2011 → November → 23 → 2nd anniversary of Ampatuan massacre marked with protests 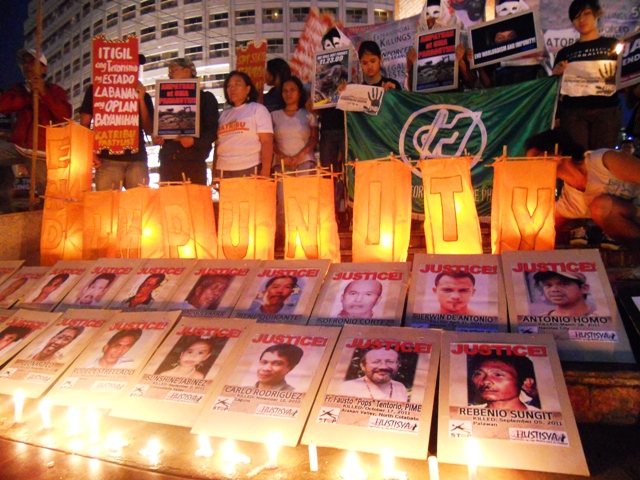 MANILA – On the eve of the second anniversary of the Ampatuan massacre, members of the campus press and human rights groups called for an end to impunity.

The Ampatuan massacre on November 23, 2009 claimed the lives of 58 individuals, of whom 32 are journalists. One victim, Reynaldo Momay, photographer of Midland Review remains missing. Suspects are members of the Ampatuan clan, an influential political family in
Maguindanao province. 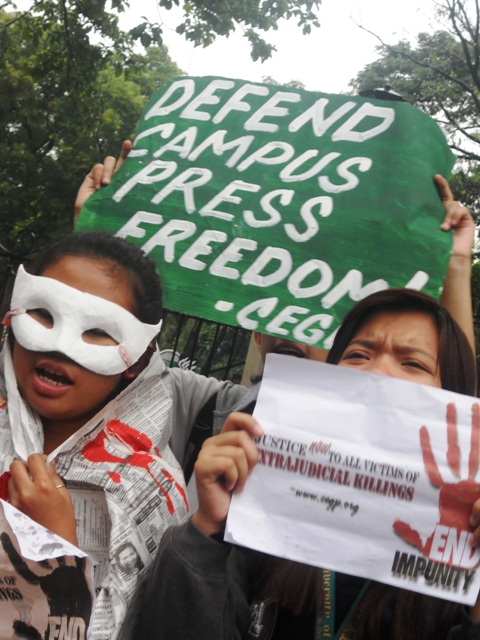 At around 10 a.m., members of the College Editors Guild of the Philippines (CEGP) tied black ribbons along España avenue in Manila as a sign of mourning and injustice for the victims of the massacre.

“It has been two years since the Maguindanao massacre happened but still no justice,” said Antonio Perdigon, CEGP-National Capital Region chairman. 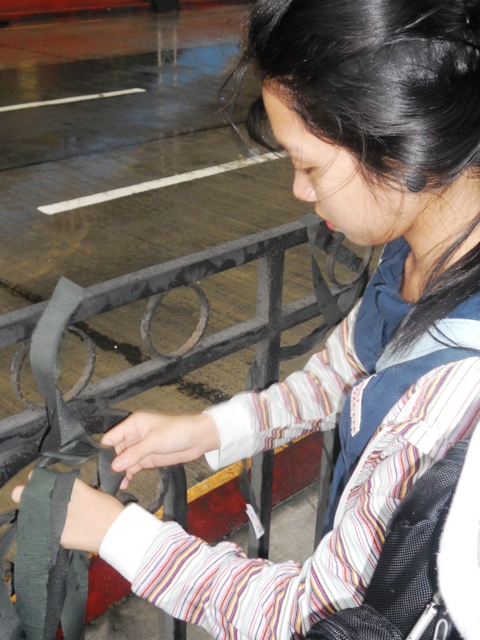 Later in the afternoon, church people and members of cause-oriented groups gathered at the Boy Scout Circle in Quezon City and lit candles and lanterns bearing words “End Impunity”

“Seven hundred and thirty days have passed since the Maguindanao massacre, President Aquino is in power for more than 500 days, still the case is not yet resolved,” Nardy Sabino, secretary general of Promotion of Church People’s Response (PCPR), said.

“The killings continue under the new administration and one is the killing of Fr. Fausto “Pops” Tentorio who was shot ten times just to make sure that he is dead. The killings will continue if the counter-insurgency program Oplan Bayanihan will not be scrapped by the President,” Sabino added. 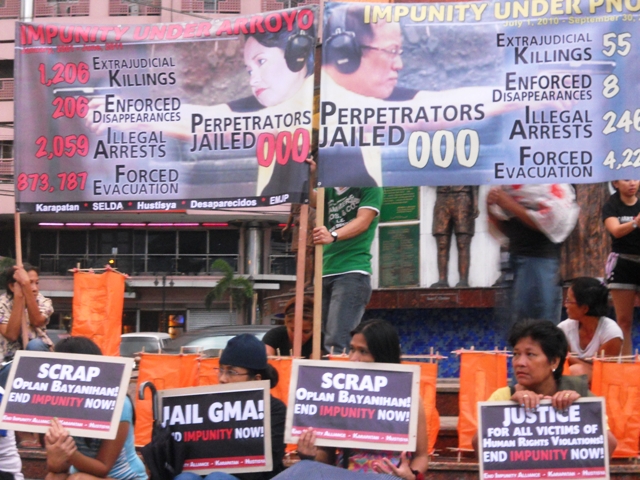 “On its (Ampatuan massacre) first year anniversary, we asked if there has been any change. And we are still asking the same question now as we commemorate its second year anniversary. Is there really a change under the administration of Aquino?” said Evangeline Hernandez, mother of campus journalist Benjaline Hernandez who was slain in Arakan Valley on April 5, 2002.

Hernandez also slammed the special treatment to former President and now Pampanga Rep. Gloria Macapagal Arroyo who is now placed under hospital arrest in the most expensive and prestigious hospital in the Philippines, St. Lukes Medical Center.

The groups also called for the prosecution of Arroyo for human rights violations. 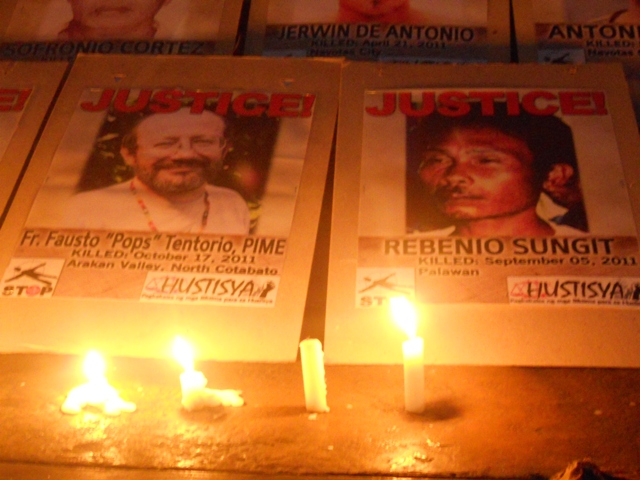 “While we welcome the issuance of arrest warrants to Arroyo and Gov. Andal Ampatuan, Sr. on charges of electoral fraud, we demand that they be charged for grave human rights violations they committed while in power. President Aquino must strike while is the iron is hot,” said Cristina Palabay, convenor of End Impunity Alliance.

Relatives of the Ampatuan massacre victims filed a civil case against Arroyo before the Quezon City Regional Trial Court this afternoon.

Palabay added: “The numbers under the nine-year Arroyo regime are appalling – 1,206 victims of extrajudicial killings, 206 cases of enforced disappearances and hundreds of political prisoners are detained, and thousands more unsolved human rights violations, including the Maguindanao massacre. Perpetrators of these crimes must not go unpunished.”

Nov. 23 is marked as the International Day to End Impunity by various media watchdogs. Members of the media, human rights groups and other cause-oriented groups will march to Chino Roces (formerly Mendiola) bridge to commemorate the second year anniversary of Ampatuan massacre.