Amazon’s squeeze will be stopped 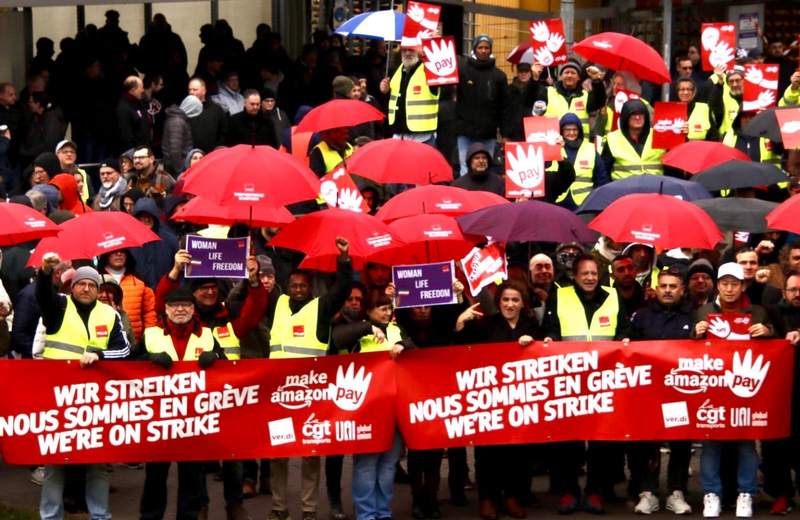 Amazon treats its workers to layoffs, real-terms pay cuts and constant surveillance. But this Black Friday, they are uniting across borders – and with environmentalists, tax justice campaigners and citizens – to fight back with coordinated strikes and actions across 35 countries.

On 14 November, Jeff Bezos announced his intention to donate most of his fortune to charity and the fight against climate change. While his announcement was short on details, its timing didn’t seem coincidental: in the afternoon of the same day, the New York Times reported that Amazon planned to lay off 10,000 workers the same week — the very same workers that created this wealth in the first place.

The news of Amazon’s biggest firing spree in its history came after its biggest hiring spree. Amid the shutdown of brick-and-mortar stores during the Covid-19 pandemic, Amazon doubled its workforce and tripled its profits.

Now, as the pandemic recedes, Amazon’s new CEO Andrew Jassy speaks of inflationary pressures and a slowdown of the e-shopping boom. But while working people across the world are facing a once-in-a-generation cost-of-living crisis, Amazon is still growing. Its revenue for the third quarter of 2022 stands at $127.1 billion, up 14.7 percent year-over-year. As Jassy revealed in a statement, that’s first and foremost down to “improving the productivity of our fulfilment network” — corporate speak for squeezing workers through ever more intrusive surveillance technology, intransparent targets, falling real-terms wages and inhume workplace conditions.

From the lack of masks and other protective equipment during the pandemic, injury rates twice as high as the industry standard to warehouses catching fire, Amazon workers across its supply chain are constantly put at risk – with fatal consequences all too often. And even though the corporation is raising the price of its Prime memberships in many markets, it refuses to raise wages in line with inflation. In the UK, it offered workers a ridiculous 35p raise per hour in August – in other words, a massive real-term pay cut. In France and Germany, workers also rejected offers that would have their pay cut in real terms. Amazon made $33.3 billion in profit in 2021, but it won’t pay its workers a fair share.

Cynically, former CEO Jeff Bezos claimed that the high prices have nothing to do with profiteering, they’re just “basic market dynamics”. But in reality it’s profits — and certainly not wages — that are driving inflation. But when Amazon workers try to fight back, the corporation retaliates with firing organisers and doubling down on its hardline union-busting practices.

While its revenue still keeps growing on the backs of its workers, Amazon also plans to expand its abusive practices globally. In the next six months, Amazon plans to open marketplaces in at least five more countries: Belgium, Chile, Colombia, Nigeria, and South Africa.

And Amazon won’t just export its mistreatment of workers, but a whole model predicated upon squeezing as much as possible from societies. While job creation is frequently invoked as an argument for Amazon’s expansion, a study in France showed that for every job created in large e-commerce firms, six jobs in the brick-and-mortar economy are destroyed. But not just that — unlike many small and medium-sized businesses, Amazon doesn’t pay its fair share of tax. In Europe in 2021, the corporation paid no income tax and instead received €1bn in tax credits on €55 billion sales.

In the case of South Africa in particular, Amazon doesn’t just not give back but actively harms whole communities. In Cape Town, Amazon’s regional headquarters is being constructed on sacred Indigenous land at the River Club, a site that Dutch colonialists stole from Khoi people in the 17th century — and which led to the gradual ethnocide of the Khoi language, knowledge systems and way of life. As the Liesbeek Action Campaign, a coalition comprising a wide range of Indigenous Khoi and San organisations, NGOs, faith-based groups, community networks, civic associations, trade unions, environmental activists and social justice entities fighting against Amazon’s neo-colonial expansion, puts it: “the same colonisers, just with different ships”.

Similarly, Amazon extends its cooperation with repression. The company works with the US Department of Defense, institutionally racist police departments and immigration agencies like ICE. Despite pressure from its own workers, the corporation continues to supply the Israeli government with cloud service technology — which may be used to surveil and control Palestinians, as well as enable Israel’s expansion of illegal settlements. Amazon plays its role in cementing Israeli apartheid.

Amazon also squeezes our planet by accelerating climate breakdown. Its carbon footprint is greater than that of three-quarters of the world’s countries despite Amazon only including 1% of all product sales in its carbon accounting. And still, while it pledged to decarbonise its operations by 2040, Amazon’s CO2 emissions rose by 18% in 2021. So why should we believe its billionaire founder’s pledge to give away “his” money to fight the climate crisis?

We shouldn’t, and we don’t. It’s obvious that we can’t rely on Amazon’s goodwill to treat its workers with dignity, to respect community well-being and to stop the destruction of our planet. Instead, we organise to fight back.

Today, on 25 November, the Make Amazon Pay coalition — which comprises over 90 organisations and is co-convened by the Progressive International and UNI Global Union — launches its next, and biggest, global day of action yet.

Transnationally coordinated, Amazon workers in Germany and France will strike together, as their US brothers and sisters engage in walkouts. Their shared demands: wages increases above inflation, better working conditions and the right to unionise without retaliation. In Poland, the UK and India, more Amazon workers are joining their striking comrades in massive protests. In Bangladesh, garment workers are rising up against the corporation’s exploitation in its supply chain. And in dozens of countries around the world — from Colombia to Japan —, citizens and activists protest in solidarity with them on public squares, in front of Amazon offices and national parliaments.

In Luxembourg, a cross-organisational coalition of climate activists, tax watchdogs and trade unionists are calling out Amazon’s tax avoidance practices in front of the Ministry of Finance. In South Africa, activists from the Liesbeek Action Campaign are calling attention to the realities of land, colonialism, struggle and resistance, symbolised by a fence blocking Indigenous people from their sacred ancestral land — just as the Dutch’s first palisade fence separated Khoi herders from their land, water, sustenance and cosmic over 350 years ago. Echoing the anti-colonial struggle, Palestinians are calling out Amazon’s technological support for Israeli apartheid.

They are joined by climate protestors rising up to demand an end to Amazon’s destruction of our planet. In Ireland, where Amazon houses most of its data centres on the European continent, they demand an end to the construction of new data centres, as they suck up a significant chunk of the State’s energy budget and put its capital city Dublin at the risk of blackouts.

It is this growing global movement that will stop Amazon’s squeezing of workers, communities and the planet. Together, we will Make Amazon Pay — and redistribute Jeff Bezos’ billionaire wealth to the people and societies who created it.