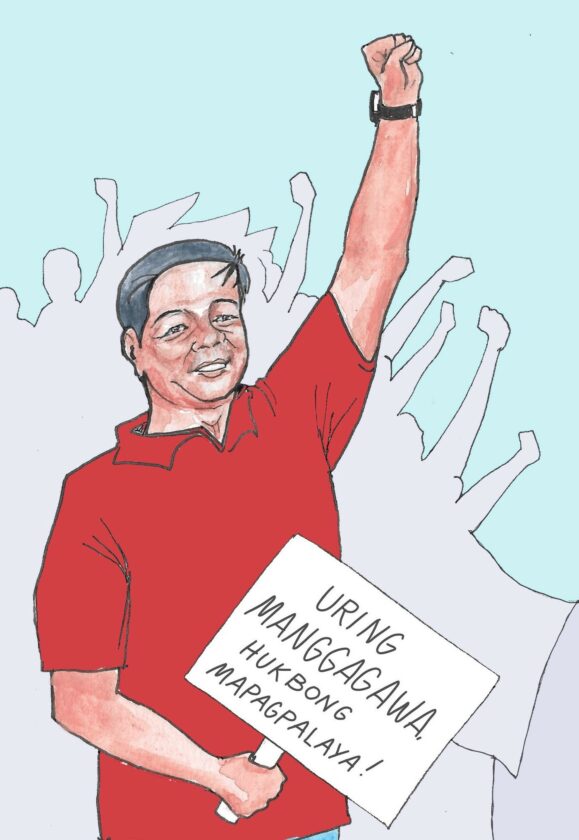 This has been Elmer Labog’s philosophy as a long-time unionist. This is also what he offers as he runs for senator in next year’s elections.

“It is an honor to be of service to the poor and marginalized,” Labog, chairperson of Kilusang Mayo Uno (KMU), said.

Labog grew up under very dire living conditions. When he was in high school, he spent his summer vacations working as a construction worker to help his family make ends meet. He was in charge of bringing the cement to the mixer and mixing it.

“At an early age, I started asking myself, ‘Why are some people rich, and others poor? Why are people suffering when others live luxuriously?’” he told Bulatlat in an interview.

His questions would later be answered when he became part of the groups that fought the Marcos dictatorship such as the Samahang Demokratikong Kabataan (SDK) and the Student Catholic Action (SCA). Meanwhile, it was his work as a hotel supervisor and his involvement in union gatherings that opened his eyes to the unjust relationship between employers and workers.

What he remembers most in his early years as a worker for a newly-inaugurated hotel was when security guards dispersed construction workers asking for food. He stopped the commotion, telling the guards, “These workers built this hotel with their bare hands, they are the reason that you have a job right now.”

He was later elected as a union officer and eventually met members of KMU. Despite having a stable job as a hotel supervisor, he resigned to become a full-time labor organizer. This gave him the opportunity to interact with various workers, including boatmen of Pagsanjan and the workers of Mariveles.

“I am lucky that my family has been very supportive and that even my children understand the path I have chosen. Whenever things are tough, I always go back to the reasons that pushed me to become a labor leader in the first place. I enjoy what I do, I enjoy being part of the people’s struggle,” he said.

A worker in the Senate

After more than four decades of pushing for meaningful reforms, Labog said the country is at its most crucial time to finally have a true representative of the poor and marginalized in the Senate. “We have been repeatedly summoned to proceedings in both the House of Representatives or the Senate as resource persons on various pressing issues. I think it is time for us to go beyond that, and to aim for a seat in the Senate that will benefit the oppressed and the marginalized.”

He has a five-point legislative agenda:

1. Higher Wages. He said that workers should have higher pay due to increasing prices of goods and services.

2. National Minimum Wage. He said that there should be no wage disparity from one region to another as prices of goods and services remain the same. He added that there are instances when some staples are more expensive in the provinces due to additional costs of transportation.

3. End Endo. He said that contractualization is used by employers to escape accountability from workers and justify low wages. This, he said, goes against their right to job security.

4. Workers’ health and security. He said that this should be a priority, even beyond the pandemic.

5. Pension Fund. He stressed that the current Social Security System (SSS) and Government Service Insurance System (GSIS) still come from workers’ pockets. He said that the government should allocate funds for it instead.

“As long as the elite reign in Congress, we will be bludgeoned with various neoliberal and anti-people laws [like] the Rice Tariffication Law (RTL), Anti-Terrorism Law, [and the Tax Reform for Acceleration and Inclusion] Law,” the labor leader said.

He added that the Senate is an opportunity to engage government institutions where people will genuinely benefit. But the work, he said, will definitely go beyond the confines of the Senate. “This is why our legislative agenda is meant to benefit the workers even beyond the elections [if given the] chance for a term as Senator.” (JJE, RTS, DAA)