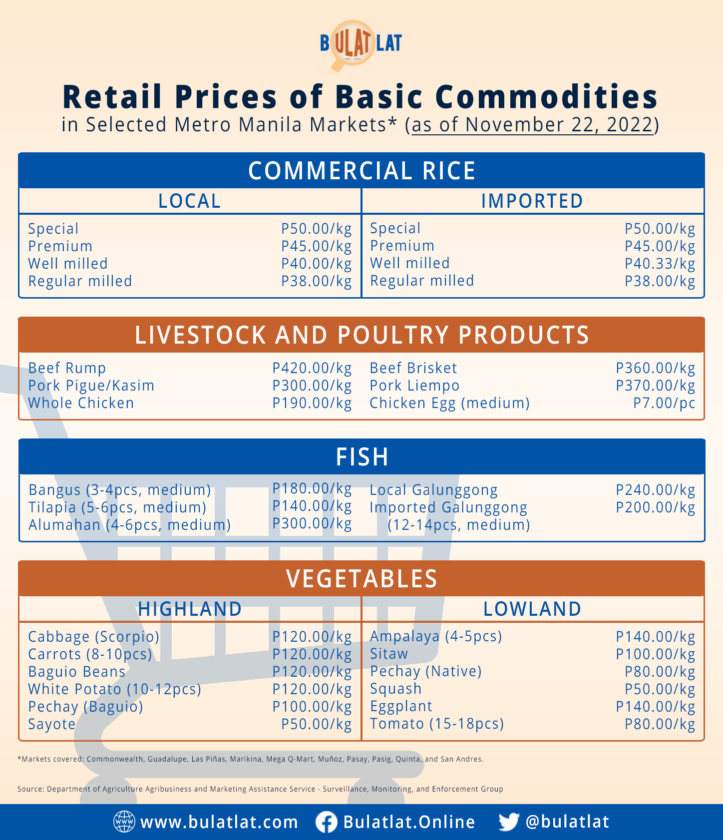 MANILA – Food security advocates encouraged the public to join their petition for an urgent wage hike as they monitored the prices of staples at Litex Market in Quezon City.

“The price of rice, vegetables, meat, fish and other basic commodities can no longer be afforded by the average consumer. The supervening event of a very high inflation is enough reason to raise the wages of workers, salaries of employees and livelihoods of [Filipinos],” said Cathy Estavillo of consumer group Bantay Bigas and women farmers Amihan.

According to thinktank Ibon foundation, the reported October 2022 inflation of 7.7 percent by the Philippine Statistics Authority (PSA) is the fastest in almost 14 years since December 2008 (7.8 percent).

Read: The poor cuts down on staples as price hikes continue

Estavillo added, “The sectors implored and suggested these seven ways to increase wages and lower prices.”

The group issued the following demands:

They said that, “while there is a rollback in the prices of petroleum, this is not enough to lower the prices of household necessities and basic commodities.”

Farmers of the Kilusang Magbubukid ng Pilipinas were also frustrated with the 7.7 percent October 2022 inflation.

“We saw this coming. Increasing inflation will be the norm under the Marcos Jr. administration if no decisive efforts will be undertaken to stop the rising cost of food, products, and services,” said KMP in a statement.

The group said consumers are experiencing the heavy impacts of food inflation from the compounded effects of successive typhoons, oil price hikes, and other factors.

“This skyrocketing inflation is becoming unbearable and unacceptable. Drastic measures should be undertaken by the national government to address the impact of inflation on consumers and the public,” they added.

Substantial economic aid is also said to be an urgent need to cushion the impact of the rising inflation, “Wages need to increase and prices need to be lowered. Get rid of excise taxes on oil and tax the billionaires to supplement cash assistance.”

“Farmers need cash aid and production subsidies. The Department of Agriculture (DA) must do away with its ‘importation obsession’ and seriously consider protectionist policies to protect farmers and local agriculture. All year round, farmers are battered by increasing prices of farm inputs and several typhoons hitting the country,” they added.

As it stands, Marcos Jr. still sits as the country’s agricultural chief despite earlier calls for him to appoint a full time cabinet member who will address the woes in the sector.

Marcos admin can address inflation if it wanted to

In a statement earlier this month, Ibon said that “the Marcos administration can address high inflation and help millions of Filipinos cope with rising prices if it wanted to.”

The group said that prices can be immediately lowered by suspending or removing consumption taxes such as value-added tax and oil excise taxes as “revenue losses from this may partially be made up for by any increased economic activity and revenue losses can even be more directly addressed with higher taxes on high-income families, large corporations and billionaire wealth.”

Ibon added that the government can help in lowering the prices of food – the major contributor to inflation hikes – with increased production, marketing, and logistics support for rural producers.

And to address demand, wage hikes were seen to likely trigger the purchasing power of families who suffered from the pandemic lockdowns and other price hikes. The group explained, “Large and medium firms are likely to afford this, while small and micro enterprises can be assisted by the government with wage subsidies.”