‘No vax, no ride,’ a burden to Filipino workers 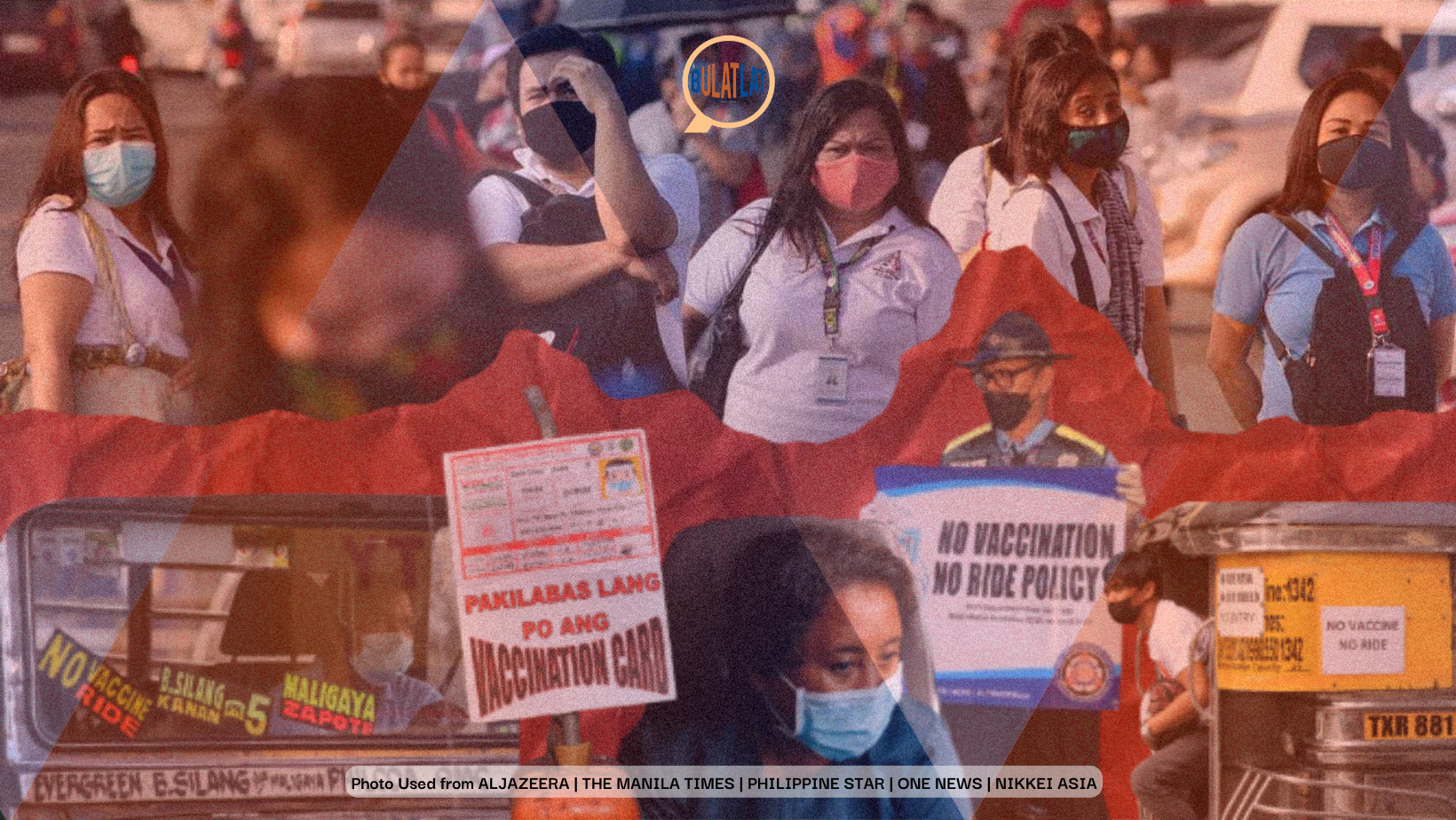 MANILA – When Rocel Deomampo, 48, a security guard for five years, heard of the news that unvaccinated Filipinos will not be allowed to take public transportation, he felt anxious.

Department Order (DO) No. 2022-001 of the Department of Transportation (DOTr) states that only those who carry a copy of their vaccination cards can take public transportation in the National Capital Region, unless there is a health pass or proof from village officials that would justify one’s travel.

This has resulted in confusion for the first days of implementation, and later, the Department of Labor and Employment clarified that workers like Deomampo are exempted from the “no vaccination, no ride” policy.

“As I have high blood pressure, I need to work to pay for my maintenance so that when my condition improves, I can get vaccinated. I hope they realize what I’m saying,” Deomampo, the breadwinner of his family, told Bulatlat.

Despite being exempted, Deomampo was still flagged by police officers asking him for a vaccination card.

“I told them that I have yet to be vaccinated because I have high blood pressure. They asked for my name and took a photo of me with my face mask off. Then, before they let me pass, they advised me to get vaccinated even if I have a medical condition,” he said.

In a statement, urban poor group Kadamay assailed the government’s policy against the unvaccinated as anti-poor and a burden to both passengers and workers in the public transportation sector. Kadamay Secretary General Mimi Doringo said the government is merely putting the blame on the unvaccinated population over the rising cases of COVID-19, when it should be providing medical services to the people.

This narrative, said Doringo, is being pushed by the government, even when medical services are scarce and vaccine rollout in communities is still slow.

Meanwhile, transport advocacy group Move as One Coalition said this policy will prevent people from going to work, earning a living, and feeding their families. The group added that the policy would leave families suffering and hungry.

“It has a significant impact. I won’t be able to work if that’s their policy. My family is going to starve. Though, I wouldn’t mind the policy if the government sends us some aid,” Deomampo said.

Human rights groups, including the government’s Commission on Human Rights, have warned of the human rights violations that may stem from this no vaccination, no ride policy.

This, they noted, also goes against Republic Act 11525 or the COVID-19 Vaccination Program Act of 2021, which states that, “the vaccine cards shall not be considered an additional mandatory requirement for educational, employment, and other similar government transaction purposes.”

“The policy is unjust and truly anti-citizens. It doesn’t address all the problems our country is facing due to COVID-19, especially the increasing number of COVID-19 cases,” Alvin Ordonia of BPO Industry Employees’ Network (BIEN Philippines) told Bulatlat in an online interview.

Like Deomampo, Ordinia is unvaccinated and had to undergo COVID-19 testing before being allowed to go to work.

This is not the first time that there have been attempts to discriminate against the unvaccinated population.

Prior to the “no vaccination, no ride” policy, the Inter-Agency Task Force for the Management of Emerging Infectious Diseases (IATF-EID) implemented Resolution No. 148-B or the ‘no vax, no work’ policy back in November 2021.

The House Committee on Labor and Employment, which earlier called for the suspension of such policy, has yet to reconvene on its deliberations of the IATF Resolution No. 148-B.

The IATF Resolution No. 148-B was also opposed by various labor groups since it further burdens the workers as they are required to present negative RT-PCR tests at their own expense.

“The law enforcers should let the workers whose reason for not getting the vaccine is a health condition pass the roads,” Deomampo said.

What the government should focus on

Instead of implementing a restrictive and discriminating policy, the Move as One Coalition said the Philippine government should instead focus on ensuring proper ventilation in public transport and terminals, increasing public transport supply and allowing more public transport to operate, increasing the budget and distributing the financial aid for 2022, and the monitoring of the minimum public health standards.

In a report published by the World Bank in 2020, the transport sector will play a crucial role in getting economies moving again – recognizing that not all workers can afford to work from home. Even during the pandemic, the report read, “public transport remains the backbone of sustainable mobility and essential to economic recovery.”

The World Health Organization has also, in detail, provided actions that the government can take in order to promote safe and efficient public transportation – from hygiene, physical distancing, and other recommendations such as the promotion of work from home set-up, providing safe walking and cycling options to the people, and other public subsidies.

There was no mention of discriminating against unvaccinated individuals from taking public transportation.

“Mass testing should continue and the government should step up vaccination campaigns. When the administration fails, it appears that the blame is passed on to the Filipino people,” Ordonia said. (JJE, RVO)