MANILA — Since 2003, a mining company has been conducting exploration work in the mountains of the coastal town of Lobo, in the southernmost part of Batangas province, about 143 kilometers south of Manila. Mindoro Resouces Limited Gold Philippines (MRL Gold), a 99-percent Canadian-owned and one-percent Filipino-owned company, sees so much potential for gold in the fourth-class municipality, known among local tourists for its white sand beaches.

So far, MRL Gold has explored 29,000 hectares of land encompassing several villages of Lobo; it is allowed to explore 10 percent of the town’s total land area, majority of which are mountainous and plains suitable for cultivation. The company has already drilled 173 holes for the exploration, each approximately one kilometer deep, in barangays (villages) Pulang Lupa and Kay Tanda to check for gold deposits.

Lobo is home to nearly 40,000 people, as well as to Mount Banoi, a watershed that provides potable water for the people of Batangas. 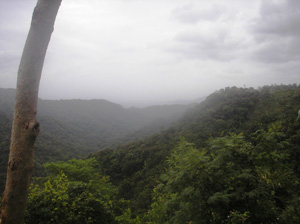 The mountains of Lobo, Batangas.
(Photo courtesy of Bukal)

For MRL Gold, Lobo promises to bring riches. For the townsfolk, however, the mining operation, which could begin anytime after the exploration phase is completed, could spell disaster. And they have barely two years to stop MRL Gold.

Several concerned groups like the Bukluran Para sa Inang Kalikasan (Bukal), an inter-organizational and multi-sectoral alliance of church people, professionals and people’s organizations, together with Kalikasan People’s Network for the Environment (Kalikasan), conducted a fact finding mission last February 21 and 22 to determine the possible impact of mining in the town.

According to their assessment, as soon as the actual mining operation in Lobo begins, potable water sourced from Mount Banoi would be contaminated as chemicals, such as mercury and lead, which are used in separating minerals from ore, would eventually mix with the water. 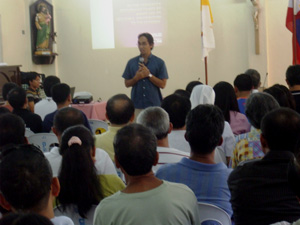 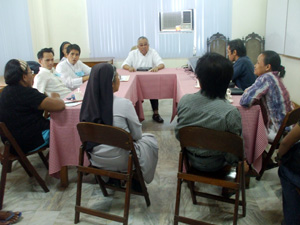 Residents and NGOs have started consultations against MRL Gold. Shown at center in bottom photo is Archbishop Ramon Arguelles of Batangas conferring with them.
(Photos courtesy of Bukal)

This contamination would bring sickness and possibly death to people, the advocates said. The contamination of water from Mount Banoi would also kill marine life in rivers and lakes in the area. There is a possibility that open-pit mining would leave Lobo’s land forever useless.

And the fact that MRL Gold has determined that gold deposits are scattered all over town bodes ill for many residents. “The mining company claims that the exploration phase took them six years because gold deposits are scattered all over Lobo,” said Ryan Damaso, campaign officer of Kalikasan and member of the fact finding team in Lobo during the recent Talakayan sa Kubo, a monthly discussion activity of the organization.

A challenge for anti-mining advocates in Lobo is the low awareness among the populace on the harmful impacts of mining. This was affirmed in the focus group discussions organized by Bukal and Kalikasan. Damaso quoted barangay officials as telling the team that “there are no sources of livelihood from both the mountains and the sea waters.”

Thus, the officials explained, residents gave their consent to the mining company to explore their land, believing that they have little to lose. Barangay officials said they hoped to gain benefits, such as employment opportunities, from the mining project.

Contributing to their decision to give consent to MRL Gold, according to local officials, is that the townsfolk’s sources of livelihood have been greatly affected since bugs began infesting the atis (sugar apple) and tamarind being produced and processed in the town. Local fisherfolk, meanwhile, complained of declining fish catch due to the entry of commercial ships fishing in municipal waters.